to be a lady 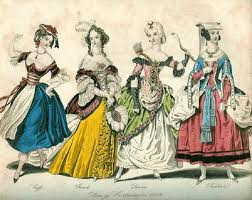 Yesterday I asked a room full of teen girls what it means to be treated like a lady in today's world. The general answer... "I have no idea, I've never experienced it before." Out of the group there was only one girl who thought that her dad treated her like a lady. When encouraged to think about what a gentleman treating a lady like a lady would look like, they didn't get anywhere past opening doors for girls and walking old ladies across the street. This seems deeply wrong to me.
I recently read the book "To kill a mockingbird". It took place over a hundred years ago in the southern States. It was an age in which ladies wore dresses and big hats. It was illegal to swear in the presence of a lady. Yes, I said illegal. Women were considered precious flowers that were delicate and needed to be spoken softly to. The men would edit the stories they told the ladies lest the violence of the stories cause them to faint. Fragile creatures indeed. The men protected the ladies from the evils of the world. And evil there was. The slaves were freed by law, but racism was still in full force. There was the same violence and cruel evils then that exist today.
I must admit, sometimes when I'm eating my cereal in the morning while watching the morning news I daydream about pouffy dresses and hats. What if the total sum of my existence was to simply be graceful? I could sew and garden, and "tend the children". I would bake and make sweet tea. And oh, the glorious hats I would have! My great grandma used to tell me stories of going to grand balls in victoria, of the "suiters" who would ask her to dance while their fathers discussed politics by the crystal punch bowl. Do you know what though? She told me about sneaking out of the ball, replacing her fancy shoes for bare feet, and playing at the ocean with her friend! She had on one instance beaten a fish with a stick until it was dead, and then proudly brought it home! Not so fragile a flower after all.
I want to be the kind of lady who will go out dancing at a ball with her husband, and then go shoot something! My female heroes are woman like Eleanor Roosevelt, who said "I could not, at any age, be content to take my place by the fireside and simply look on. Life was meant to be lived." Mother Thereasa, Amelia Earheart and Rosa Parks. Women, ladies, who lived great lives, who changed the world, but not as a man. As a woman.
Ladies are strong, and to be treated with honour. That means more then opening doors for them. It means treating them with respect and honour. That's what it means to be treated like a lady. Also, a true lady is a woman who deserves to be treated with honour and respect because she is both respectable and honourable!
Posted by Carmen Rempel at 12:44 PM