The crowd cheered and I felt the nervous excitement of months of planning, sacrifice, and hard work come to a head in this moment.
The Victoria Good Life Fitness Marathon. My first marathon ever.
I started to run and felt like my legs were extra heavy. Great. A dead leg day. These happen every once in a while. I just told myself the same thing I always tell myself "It's OK Carmen. How many times did you think you couldn't do it, and you did? You will do this today." By kilometre 5 it wasn't any better. "I should be warmed up by now." I thought. Around that point is where I saw my family.
All of them. (Minus Corey)
Seriously. I had a flock of fans cheering me on. More fans then any other runner by a land slide. I would need them that day.
Here is when I spotted them for the first time. 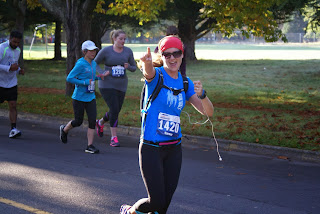 "Hey! That's me!" I shouted when I saw the big Youth Unlimited sign my father in-law was holding.
The second time I saw them I had to choke back tears. The show of love and support had me very emotional.
The next 10km were not easy ones. Something was off. The next time I saw my family was at Kilometer 18 and they asked how it was going, I gave the thumbs down.

By kilometre 20 I was limping.

By kilometre 24 I was hobbling.

My back was out. This hasn't happened to me in over a year (since I started running regularly) and was an unhappy surprise to me. No. I'll be more honest then that....

I called my sister/athletic therapist on the phone and told her that I was broken and wouldn't be finishing the race today. "It's not the kind of pain you push through Kim. It's bad pain."
She caught up to me after the turn around point and laid me out on the grass on the side of the road and started practicing various forms of torture on me. 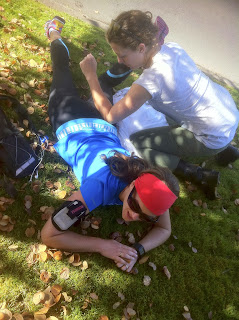 People are streaming past me. Slow people. While I'm being pummelled on the side of the road in what looks like a strange mugging, I see the cop car go by. This car signals the end of the race. The roads open up again after he passes. I resigned myself to not finishing. We were making plans for a mock-race when I got home. Maybe get some youth to hold up kilometer marker signs, take some photos, and make a medal out of a crushed coke can at the end. I promised my supporters that I would run 42.2km. So I had to do it. Then we heard it... 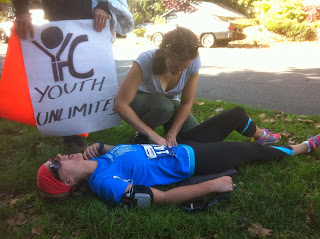 "Thunk!" I heard it. Kim heard it. I think the whole island heard it. The sound of my hip popping back into place. I got up. Tested it. Looked at my family (who had all caught up and were with us now) and said "I think I can run." My mom says to me "You will regret it forever if you don't try." So I take off. I can see the end of the race car just under a kilometre away. I catch up. As I run past him he says "So you caught up eh?" "Yup!" I yell as I blast past him. They have shut down the water stations already, so I thank God for my camel pack. I decided to just keep running until my hip comes out again, or until they kick me off the course.

I get to Kilometre 31 and I think "I'm going to make it!" They only allow 5:30hrs to complete the marathon before they shut it down. I check my watch. I have just over an hour to do 11km. It's going to be tight. I'm slow on a regular day.

For encouragement my Mom and Dad start running beside me when they see me. 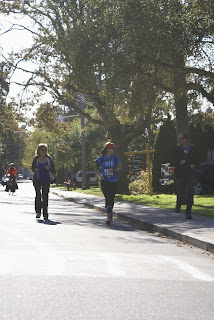 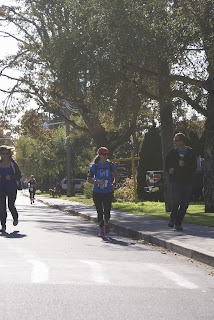 Dad doesn't.
He just keeps running with me. Eventually he hands his sweater off to the family as they drive by in the truck. He's in jeans and work boots. What a guy. We are chatting as we run and he tells me he has never run more then 5km before. 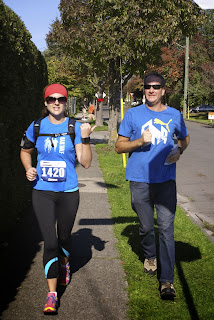 We start passing people. We get far enough ahead that the roads are no longer closed. I can start running on the road instead of the side walk again! This is encouraging.
The last 11km running with my dad were the easiest and most enjoyable of the entire marathon. 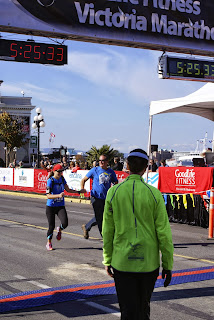 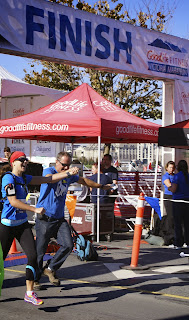 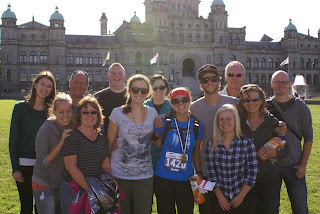 Today I am more grateful for these people then I was last week. I know that a race run with others is better then a race run alone. I blubbered like a baby at Thanksgiving dinner when I tried to articulate my love and gratitude for the family God has given me.

Thank you family for being amazing. I couldn't have finished that race without you. Looking back now, I wouldn't have had it any other way.
I love you all.