last night we had a great time, my co-worker Danny said it best in his blog proyouthworker.blogspot.com
Does this look like prayer? 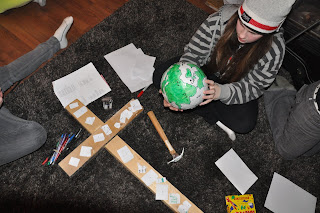 It actually didn't feel much like a prayer night. There was mingling. Laughing. Interacting and fun.
Most of the time when we picture a prayer meeting it seems like something that may be stuff and boring. Although ultimately important - still a bit uncomfortable.

We started off the night with some music. Singing. But not your typical songs. We sang songs that were out of the culture that we could see God's hands in. Bands like Collective Soul and Snow Patrol. When it came to the song "Lean on me" the sound level in the room was deafening.

We moved into a time of confession. Taking the things we wanted to say to God and nailing it to a cross. We also had a whiteboard in the room that was God's facebook on which people could write anything they wanted. It turned into the most noisy prayer meeting ever. It was more like a party as people interacted about life and the cross was the center of the interaction. Every once and while your heard the nails being pounded in and that meant another amen. During this all we had DJ Chris Harrington mixing some great tunes.

The night took a different spin as we took some time to tell God about our passions. We passed around a globe and people could write their prayers out for the world on it. We also made a poster of the things that we are the most passionate about. 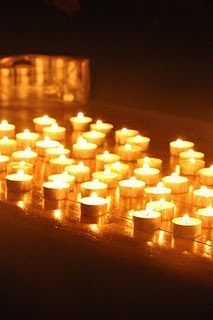 The night ended as we lit candles to represent our prayers to God. It started off dark with only a few candles burning but by the end of the night the room was glowing.
I loved seeing prayer. I loved being able to grasp it and conceive it. And to take a bunch of people who only a couple years ago wanted nothing to do with God to spending an entire evening in prayer with them really was a miracle.
Posted by Carmen Rempel at 6:45 PM No comments:

Corey came home to me crying on the couch with a book in hand today. When he asked I told him that it wasn't the horrible story that brings the tears, its the blue high lighter. Danny gave the book to a young girl to read, she read it and loved it so much she asked me to read it so we could talk about it together. She told me how much she related to the girl in the story. The story is filled with rape and other abuses physical and emotional, the deaths of friends and how this girl deals with those things. The story would break your heart, the fact that this girl could relate to such a tragic story crushed mine. The book is called "this road I walk" by twyla rempel-saddul. Here are some high lighted parts: "she wondered if a person ever actually got over a tragedy." "God must be punishing me." "it was only a matter of wearing her down and exhausting her resolve." "shame." "she scrubbed with soap until her skin turned red and her flesh burned. She had to make the feeling go away. the filth stuck to her." "humiliation" "She couldn't allow herself hope."
This teenaged girl assured me that the book has a good ending, so I will keep reading, but right now I just want to close my eyes and ears and pretend these cruelties don't exist. I want to, but I wont. Too many people close their eyes and ears to these cries of hurt little girls, misunderstanding when they act out. So I refuse to stop, I will reach out, I will keep reading, and I will keep hoping for the happy ending.
Posted by Carmen Rempel at 6:27 PM 1 comment: 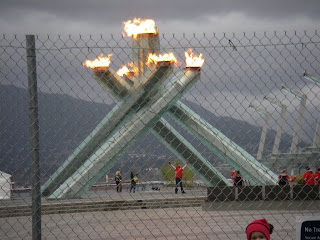 Two youth leaders rose to gold standards tonight. They took on and lead our thursday dessert night. We made it an olympic themed night in honour of the chaos that is happening around us here in the lower mainland. I helped and guided them providing ideas and resources and thats about it. They took it and ran with it. I am so proud of them.
It was a night of games and fun, starting with running in with our Olympic torch (a butane lighter) and ending with an awards ceremony (yogurt lids glued to cardboard on a ribbon). Us leaders then took the opportunity to give out individual awards to all the teens in attendance (the bottom of a styrofoam cup with a sharpie written word on it a hole and a piece of string). It was a touching ceremony. One teen got a medal for endurance in his life, one for commitment, another teen was awarded a medal for her Spirit.
That "spirit" girl helped me carry some supplies out at the end of the night, I told her that I meant everything I said earlier about how I love her spirit and am so happy she has come and joined our little group as of late. She told me that it was a better influence on her and it was better then going out and getting drunk. She told me just a few facts about her life before she moved to Langley and I was surprised by how much she had endured already. I am excited to get to know her better and glad that our thursday night dinners are serving the purpose we intend for them.
Go Canada Go!
Posted by Carmen Rempel at 9:50 PM No comments:

Its why i do what I do, to hear those words. The guy sitting opposite me in Starbucks said "I dont want to just dip my toe in, I want to dive in all the way." We were talking about his relationship with God. We discussed how to "dwell in the presence of the Lord" and what that means. How to find our shelter in him, we used the analogy of chicks who find shelter from the storm under the wings of their mother hen. "Under the shadow of the Almighty you find refuge." It was a great talk and now we are going to meet every monday during his spare block to study the bible and learn how to pray and listen to the voice of God together. I'm really excited.
Posted by Carmen Rempel at 9:42 PM No comments:

It was at our thursday night dinner last week that we ate ice cream cake and sang happy birthday to one of our core kids. I got all choked up looking around the room at all the faces singing away. This has become a family. We have hurt together, and laughed together, and now we were celebrating together. It was touching. The sister of the birthday girl made up a video tribute to her older sister. Pictures, music, and touching words all together made us laugh and cry. At the end of the video the words flashed onto the screen "and thank you to those of you who have helped us become this way... you know who you are." Then a picture of me and this girl flashed onto the screen. Then her with my two coworkers. I stopped trying to hide my tears.
This is mostly a thankless job, but when thanks does come, it is so sweet.
Posted by Carmen Rempel at 2:27 PM 1 comment: